Thank you for visiting my blog today; I hope you are having a good day.
I don't normally post anything quite like this, but I just had to put my thoughts out there somewhere ;-)
Most Australians would have been shocked with the announcement that Qantas had grounded all their flights this weekend.  Qantas says it is the only action left to take to bring the dispute resolution to a head.
Whilst I realise there are always two sides to every story, and there are most probably things I am not privvy to and would not understand completely, but I fully support the workers.  I believe they are putting the safety of the airline and its passengers, the security of the employees and the reputation of the company FIRST.
I DO NOT believe that this dispute is purely about pay conditions as the media is constantly reporting - it is more than that.  Amongst many other things, from what I understand, Qantas Pilots have been negotiating on a 'Qantas Flight/Qantas Pilot' clause - basically meaning if it is a Qantas flight, then Qantas qualified pilots should be flying the plane.  Engineering staff are protesting as moving operations to Asia could have a detrimental effect on the overall safety of the aircraft.  Baggage handlers are protesting on workers' safety conditions and pay.  I have not heard of any of the Flight Staff protesting, but I would imagine they have some grievances too ;-)
During my investigations to see what all the fuss was about, I discovered the following information about Alan Joyce, from Wikipedia
I quote some of the bits that caught my attention
Career
Joyce worked at Aer Lingus, the flag carrier of Ireland, until he left in 1996 to join the now-defunct Ansett Australia. Joyce spent eight years at Aer Lingus, where he held a wide spectrum of positions in Sales, Marketing, Information Technology, Network Planning, Operations Research, Revenue Management and Fleet Planning.

Ansett Australia, Ansett, Ansett Airlines of Australia, or ANSETT-ANA as it was commonly known in earlier years, was a major Australian airline group, based in Melbourne. The airlines flew domestically within Australia and to destinations in Asia during its operation in 1996. The airline was placed into administration in 2001 after suffering financial collapse, and subsequent organised liquidation in 2002, subject to deed of company arrangement. Ansett operated for 66 years and 11 days after its first takeoff from Hamilton, Victoria.
This is what I have observed from the above information ........ it took Alan Joyce only 4 years to run Ansett into the ground .......... it has taken him 11 years to have a detrimental impact on Qantas, but Qantas was a bigger company to start with.
The airline is struggling, as most airlines are - fuel is expensive and it takes a lot to provide a good service to their customers - but to award the CEO with a 70% pay rise (as well as other board members receiving a payrise) and not even be willing to negotiate with the core employees about a measley 5% payrise (amongst other things) IS CRIMINAL!
I have been following this facebook page with much interest.
UPDATED news links
http://www.bbc.co.uk/news/world-asia-pacific-15505745
Other news links
http://www.adelaidenow.com.au/news/breaking-news/joyce-holding-knife-to-nations-throat/story-e6frea73-1226180382319
http://www.adelaidenow.com.au/news/breaking-news/pm-gillard-defends-qantas-fair-work-referral/story-e6frea73-1226180451372
http://www.adelaidenow.com.au/news/breaking-news/aussie-cricketers-world-leaders-among-qantas-grounded/story-e6frea73-1226180593645
http://www.adelaidenow.com.au/news/breaking-news/qantas-hearing-adjourned-till-2pm-sunday/story-e6frea73-1226180571383
So thank you so much for sticking with it and having a read of my 'vent' ;-)
On a side note - I was supposed to be in Sydney this weekend with my School Reunion (I would have flown Qantas by choice), but since I haven't been working this year, I couldn't afford to go.  I hope my friends that did go are not stranded too long ;-(
I hope you all have a good day - remember, any time spent doing what you love makes it a good day ;-)

Email ThisBlogThis!Share to TwitterShare to FacebookShare to Pinterest
Labels: qantas

A Christmas Tree for Robyn

Here is tease photo I posted earlier for Robyn, for Christmas Block Swap 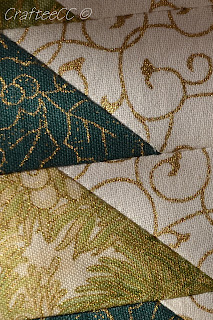 Robyn recently posted on her blog that she has to step down from all her swaps as life is just too crazy at the moment.
I do hope that 2012 is better for you Robyn.
I am assuming by now that Robyn has received the block I made for her, so I will post a full pic here. 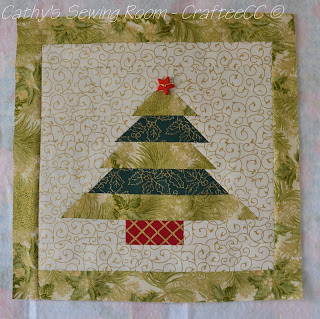 Robyn requested christmas tree either in patchwork or applique, in red, green gold and cream - I hope you are happy with what I have made for you ;-)

The red star button came from this lovely swap package from Barb in The Fat Quarter Swap for September. 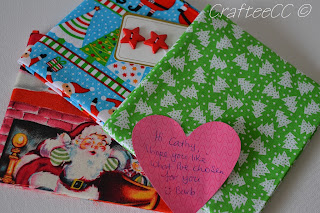 Posted by CathyC at 7:30 AM No comments:

Morning everyone!  thanks for visiting my blog and I hope you are having a good day ;-)
I received these lovely blocks in the mail yesterday 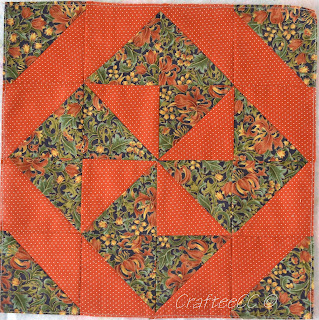 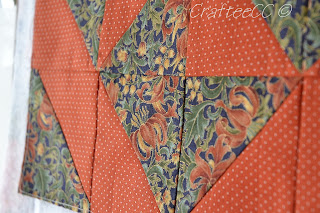 from Jodi for BSA 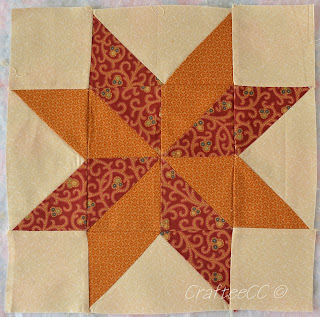 from Nolene for QBSA
thank you so much ladies, you have picked the most perfect colours ;-)

Another sampler for Block Lotto

1 Disappearing 4 patch
1 Diamond Panes block
1 Pinwheel
Here are my three (3) blocks (to be donated)  I am hoping to get some more done, but hubby will be home for the next two weeks and we are hoping to have a few days out and about and play tourist in our own city ;-)

I have finished my swap blocks for October ;-)
Here is a tease for Jodi for Block Swap Adventure 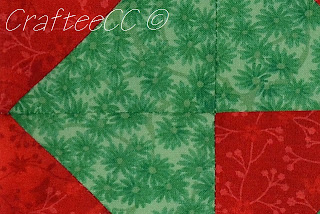 Jodi, your block will be in the mail on Monday.
EDITED:  My Blocks have been posted to Jodi (BSA), Robyn (Christmas Block Swap) & Nolene (QBSA)
Ladies, please let me know when they arrive ;-)
Next up are my blocks for Block Lotto
This month we are requested to make a sampler block in Blue & Cream (optional tan can be included) 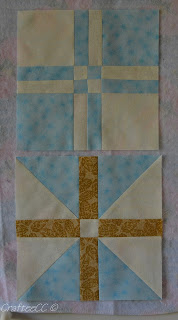 1 Disappearing 4 patch
1 Diamond Panes block
Here are my two (2) blocks for the moment - I intend to get some more done next week.

Posted by CathyC at 8:20 AM No comments:

Have just received confirmation that my September block
for Block Swap Adventure for Leanne has safely arrived.
I had such a 'mental block' for this one.  Leanne asked for any block that might go with the Shabby Chic feel and had a colour preference of Pink & Green/Shabby Chic with a White/whitish background.

Here is the tease pic I posted earlier. 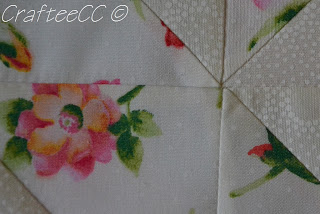 Here is the full block 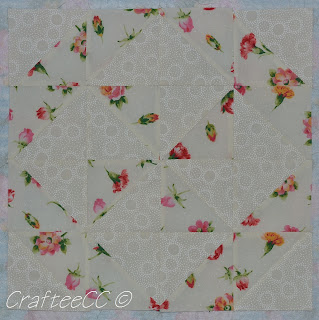 The photo does not look quite right - in real life the flowers stand out more ;-)

Posted by CathyC at 8:00 AM No comments:

Am on a roll this month - getting my blocks in early (well early for me)
First cab off the rank is for Robyn, for Christmas Block Swap 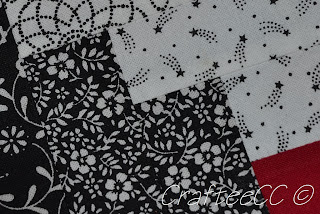 I almost squealed with joy when I saw Nolene's preferences ;-)
I have also received a block from Gemma for
the August swap for Block Swap Adventure

this gorgeous block looks like it is hand sewn!  it was definitely worth the wait - thank you Gemma ;-)
Gemma, also sent a postcard, but I forgot to take a photo - sorry ;-(

I got a brief email from Jen (no blog) to let me know that the block I made for September Christmas Block Swap has arrived ;-)
here is the tease pic I posted earlier 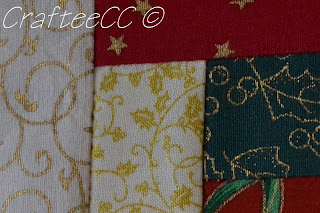 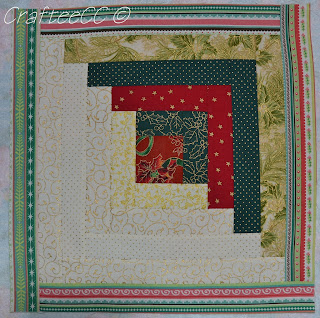 Unfortunately, I forgot to take photos of the extra FQs I threw in ;-(
I hope Jen likes what I have sent ;-)

Posted by CathyC at 5:59 PM No comments: 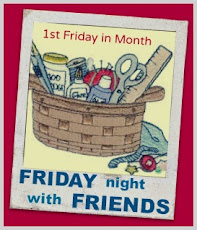 1st Friday in each month 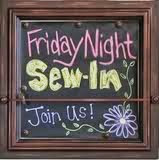 3rd Friday in each month 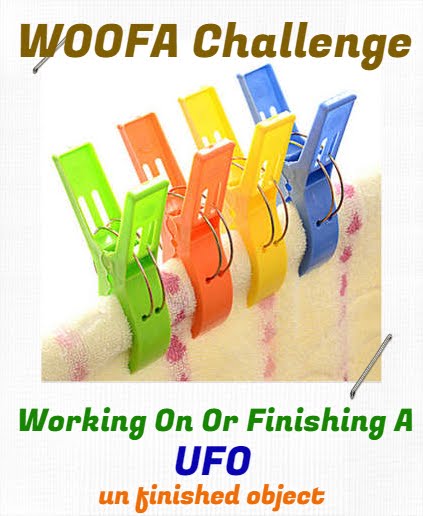 I am the legal copyright holder of the photographs on this blog and they may not be used, or re-published without my express consent.
If by chance you would like to use any of my photos, please feel free to ask, I most probably won't say no.
I would love to hear from you, especially if I have inspired you in any way - feel free to leave a comment and let me know ;-)

Get my posts via email 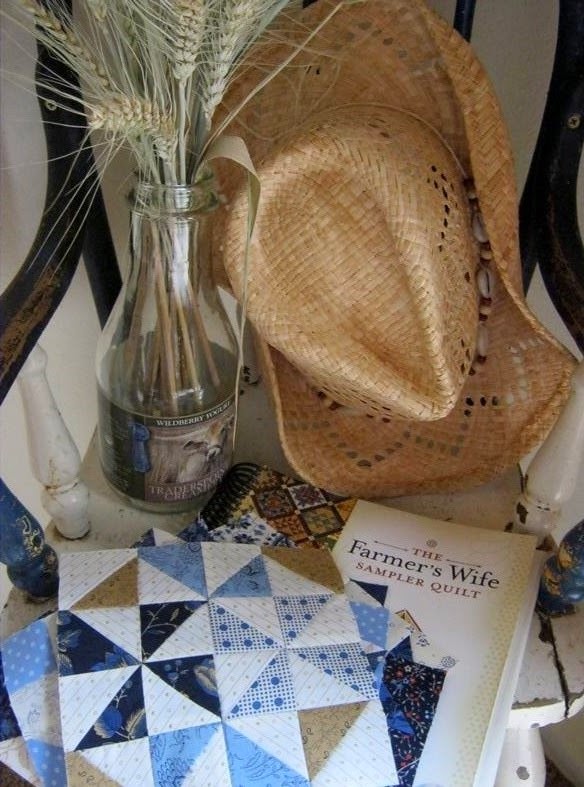